A new and innovative product, designed and fabricated here in Cardiff. Tired of hearing about all the injuries caused by ladders and using our years of manufacturing experience we bring you the Ladder Genie. 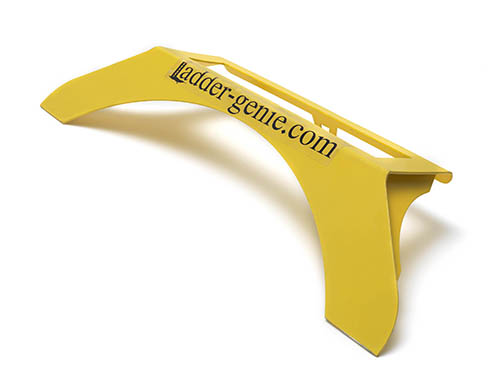 Ladders are the oldest and simplest devices that enable us extend our ability to reach heights taller than ourselves. These extremely useful devices have been in use as long as there have been human settlements and civilisations. Cave paintings found in Valencia, Spain that date back 10,000 years show a scene in which people are using a ladder to raid a honeybee nest for its sweet and delectable contents. The functional design of the ladder as it’s known in modern times can be traced to the ancient cultures of the Hebrews and Egyptians, who developed and refined it. The earliest ladders had a single vertical member with horizontal rungs on either side. Such ladders, though, could be quite unstable. Hence, the development of the ladder in the form we know today. This design is much more stable because it distributes weight evenly and doesn’t slip sideways as easily.

Types of Ladders in Use Today

Ancient cultures first used ladders made from plaited grass, but eventually they came to be crafted from timber. A common variety of ladder is the rigid type. Modern rigid ladders are made not only from timber but also from glass fibre and aluminium. Rigid ladders are used for a large array of applications. Perhaps the most familiar types are attic and loft ladders that make it easy to access these spaces. One well-known rigid ladder model is the extension ladder, which consists of two or three sections that can be raised by way of an integrated system of ropes, pulleys and locking mechanisms. Another type of rigid ladder is the bridge model that serves to connect two points between which a drop exists. An important variety of rigid ladder is the trestle ladder, which has an A-frame design and a telescopic centre section. A cat ladder is one that’s used on steep roofs. It’s designed to keep workers safe by preventing sliding. Another type of roof ladder is fitted with a hook that latches onto the ridge to stabilise it.

Fixed ladders have two vertical side members called stiles that are joined by a number of horizontal members called rungs. The stiles are permanently attached to a wall or other structure and the ladder has no moving parts. Folding ladders are handy items that are ideal for users who have limited storage space. The most common type of folding ladder is the step type that can be found in many homes. This ladder has an A-frame design with steps on one side. Two sturdy locking hinges keep the ladder secure in use. Although you wouldn’t think so, the step ladder is a relatively modern development, having been invented in the 19th century in the US by John H. Balsley, who obtained the first US patent for a ladder of this type. Step ladders are popular because they are free-standing and have wide, comfortable steps, rather than narrow rungs. Hinges at the top allow a step ladder to be folded for easy transport and storage. Step ladders also are known as A-frame ladders. A variation of the step ladder is the platform type that has a small horizontal platform at the top. There’s a specially designed ladder that’s made for deployment on stairs or other uneven surfaces, with extensible legs that lock securely into place. Another special-purpose ladder is a model that has a hook at the top to attach to a windowsill. This ladder is especially useful to fire fighters and rescue personnel.

Whether ancient or modern, ladders are useful and necessary tools.